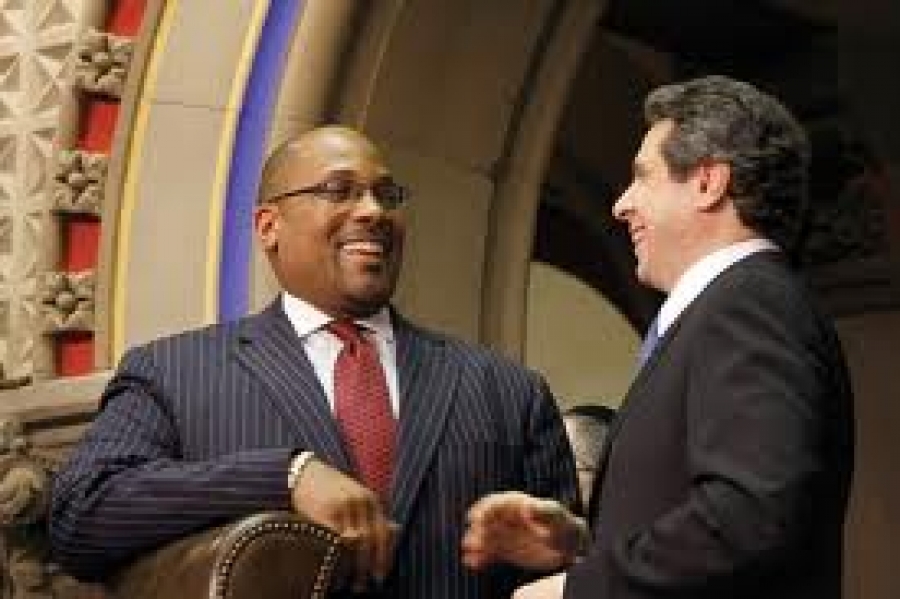 ICYMI: Newly-elected Senate Minority Leader Andrea Stewart Cousins was in Albany yesterday to meet with Gov. Andrew Cuomo and assure him that her conference plans to work together “as partners” with their fellow Democrat in the coming legislative session.

“We had a very, I think, heartening conversation about his agenda,” Stewart-Cousins told me during a CapTon interview after her sit-down at the Capitol with Cuomo.

“Of course, he wants his agenda passed, and his agenda looks very similar to ours. So, we talked about working together as partners, trying to find ways that we can push forward. And I think the commitment is really a professional, substantive, productive session. And we’re willing to work. We want to be parnters with the governor. We want to get our work done.”

Stewart-Cousins, who ousted John Sampson from the leadership on Monday, stressed that the Democrats have turned a page and putting their dysfunctional past behind them. She spoke of reaching across the aisle to work with the disaffected members of her conference, the IDC, and said she’s hopeful her election will clear a path for the five independents to return home to re-join their “regular” colleagues.

The IDC’s leader, Sen. Jeff Klein, made it quite clear that he wouldn’t be returning if Sampson remained as leader. Sampson subsequently said he would step down if the wayward Democrats came back and restored the conference to what its members see as their rightful place in the majority. But then he subsequently tried to retain his position and lost to Stewart-Cousins, 19-6.

A number of Senate Democrats and their allies have called for Cuomo to get involved in the leadership mess and convince the IDC to sever their power-sharing agreement with the Republicans. But Stewart-Cousins told me last night she decided not to seek an intervention from the governor.

“I did not ask him to get involved,” the minority leader said. “I think we all know what we have to do…as far as people who are elected to be on a certain line to come and conference with the people of the party that they actually voted for them on. I think the real people who are being disenfranchised…are the voters. And I think that’s a real issue.”

“And obviously, there are so many constituents who sent people there and expected their voices to be heard. I think that if we do the things that we are focused on for our constituents, then we will make the very best point of why Democrats need to be – statistically and realistically – in fact in charge in the majority. We’re going to work step by step to do it, but right now, we’re taking the cards as they’re being dealt.”

It will be interesting to see how Cuomo works with Stewart-Cousins going forward. Since she’s the first woman legislative conference leader – and African American, to boot – he will be hard-pressed to leave her out in the cold when negotiations on top issues and the budget get underway next year, the way Democrats complained he often did with Sampson and his Assembly counterpart, Assembly Minority Leader Brian Kolb.

Stewart-Cousins clearly recognizes that Cuomo may well end up needing the Senate Democrats as much as they need him if he wants to get truly progressive versions of top agenda items like campaign finance reform passed. Of course, if he’s willing to accept watered down versions of key bills – something the Democrats say they won’t do – then that changes the calculus entirely.

Cuomo has yet to put forth any concrete proposals for 2013, but he’ll start to flesh out his priorities on Jan. 9 when he delivered his third State of the State address.